The first book in The Reading Game learn-to-read series tells the story of a skunk without a stripe who is rejected by the other skunks but finds acceptance among some cats and becomes their defender.  It’s told in rhyme, is beautifully illustrated, and is 32 pages long.  It will be the first book the student reads, and there are five more to follow in this groundbreaking learn to read program.

Each of The Reading Game's six stories is told using just thirty new words.  These are broken down into six sets of five words.  The student learns to read each set of five words by playing a simple word matching game.  Frequent exposure through play hardwires these words into long-term memory.  Rote learning is transformed into a fast-paced game with a winner every few seconds. 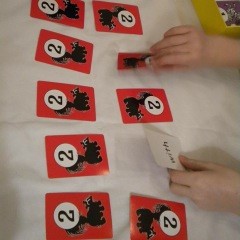 After completing Skunk, Game 1, the student has learned five words (can, cat, is, me, not).  Playing Game 2 adds an additional five words (sad, she, stay, this, with). The student is then shown the picture flashcard relating to the two game sets he/she has just played. This stage helps the child transition from the stand alone words learned in game play to short sentences and phrases.  This stage also introduces capitalization and punctuation. 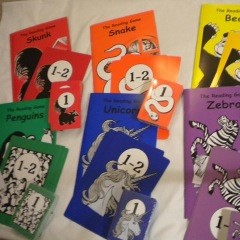 It’s important that the tutor move on only after the student has demonstrated proficiency in the words already covered.  Some students will take a little longer; a few may take a lot longer; but ANYONE CAN LEARN TO READ.  It’s not hard to persevere when the learning process is fun!

After completing Skunk Game 6 and reading the final flashcard, the student has demonstrated a knowledge of the thirty words they need to read the Skunk Book.  Each subsequent matching card game and book set in the series adds a further thirty words for a total of 180 words.  Of the twenty-five most commonly used English words, twenty-three are on that list; of the most commonly used fifty words, forty-two.

Ashleen, just four at the time, was the first test case for The Reading Game. After playing the memory card game over the period of one week, Ashleen was able to read her first book, Skunk. Watch Ashleen in the video to the right to see her first attempt at reading the book after playing the card game.

She completed the series of six over the next few weeks with a reading vocabulary of 180 words. From this exciting start, The Reading Game was tested in field studies from the east Coast to the West, with kindergarten classes, reading intervention specialists, homeschooling parents and instructional coaches, with fantastic results. 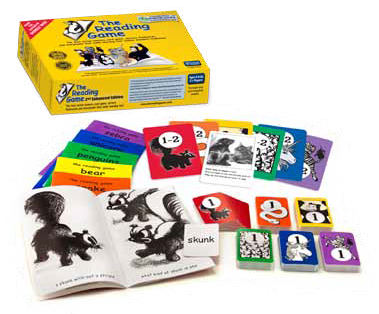 Buy Now from one of
our trusted retailers.
Click here. 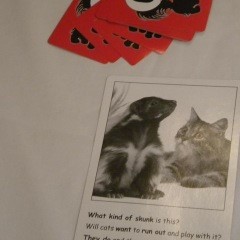